Do you know the MUFFIN man?

Here's the recipe for RASPBERRY and WHITE CHOCOLATE MUFFINS that I made for work the other day :) Great easy recipe which tastes delicious!
Recipe adapted from That's life

1. Preheat oven to 190oC and line 12 hole muffin pan with patty cases.
2. Sift together flour, baking powder and sugar in large bowl.
3. In small bowl/jug whisk eggs, milk and butter together. Add liquid mixture to dry ingredients along with raspberries and chocolate and mix until combined (do not overbeat!)
4. Spoon mixture into muffin pan and bake for 20-25 minutes or until skewer comes out clean and muffins are golden. 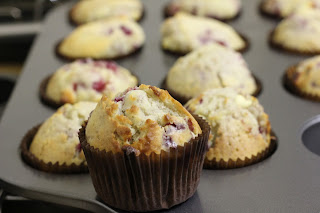 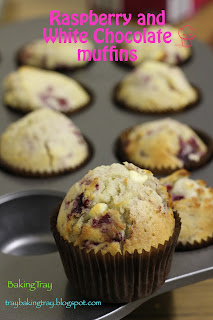 For my Banana and Walnut muffins, I added 1/2 cup brown sugar in place of 1/2 caster sugar. Added 3 bananas, mashed and 1/2 cup chopped walnuts to replace raspberries and white chocolate. 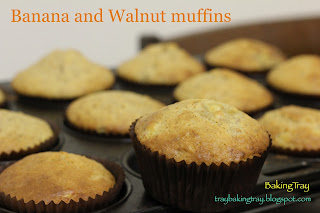 Posted by BakingTray at 6:54 PM No comments:

Hi guys... I'm so excited to anounce I just had my first WORK CATERING experience!! I guess you're wondering how it came about.... WELL.. a friend was helping to organise lunch time seminars at work however lunch wasn't provided.. as it didn't fit in the budget >< Although there were snacks such as chips, biscuits etc. I just wondered what the budget actually was .. and found out I could actually do quite a bit with that money! So I just asked the person in charge of the food if I could help cater =D 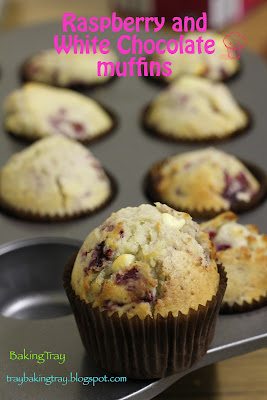 So.. did I get it right? =p You will have to ask my colleagues about that XD I took a risk and used a recipe that I hadn't tested... but thank God I think they worked out ok :) Made a total of 48~ and didn't take that long either! So maybe this is the beginning of something BIG for BakingTray! Watch this space ;P
Any suggestions on what I should make next week? =)
Posted by BakingTray at 7:24 PM No comments:

Japanese Cheesecake - not your average cheesecake ^_^

This has been on my "to-bake-list" for a while so when cream cheese was on sale, I knew exactly what I was going to bake! I love the texture of this cake.. it really is light and fluffy and not too heavy as some cheesecakes can be. So you can eat many slices and not feel sick =p

1. Preheat oven to 150oC. Grease and line 2 rectangle pans.
2. Place large bowl over pot of simmering water making sure the bottom of the bowl doesn't touch the water. Pour in milk. Add cream cheese, stir occasionally until completely dissolved and mixture turns smooth.
3. Stir in butter till dissolved.
4. Remove from heat and let mixture cool down. Add egg yolks and combine well. Make sure the mixture isn't too hot as to cook the egg yolks.
5. Combing plain flour and corn flour. Sift flours into cream cheese mixture, a little at a time. Mix well between each addition making sure there aren't any lumps.
6. Stir in freshly grated zest and set aside (I forgot to add this!!! So I think it made the cake taste a little eggy ><)
7. Place egg whites into a clean bowl and beat with electric beater for ~3 minutes. Add cream of tartar and continue to beat. Gradually pour in sugar and blend until very stiff peaks form (I think I may have not beaten enough and so I didn't quite get the height I was looking for).
8. Fold in egg whites into cream cheese mixture with spatula (a third at a time) until incorporated. DO NOT stir or beat.
9. Pour mixture into 2 baking pans. Place pans into larger baking tray. Add hot water in the tray up to half way. Bake for 50-60 minutes.
10. Turn off oven. Leave door ajar for 10 minutes. Remove from oven and let cool completely on wire rack. Chill in fridge for at least 3 hours.
I really love this kind of cheesecake (well I love all kinds of cheesecake but this type especially because it just melts in your mouth =p). The texture also got a thumbs up from my food critics XD which is a big deal! haha 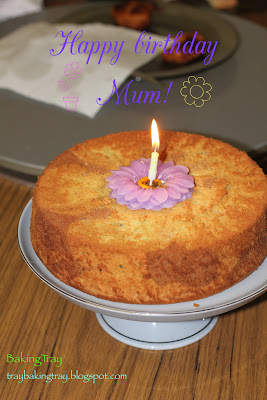 It was my mum's birthday earlier this month. I always find it hard to buy presents because I don't know what she wants.. and usually she doesn't like the things we buy xD and gives it back to us. So I thought the best thing would be to bake a cake =) Priceless right? haha I saw this recipe on Sweet Samsations blog (Really liking her blog atm!!) and the cake looked SOOO COOL!! so had to make it!! 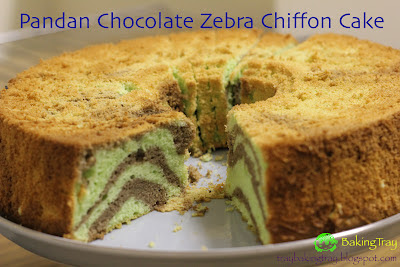 I love the zebra stripe effect of the pandan and chocolate :) and this time I used REAL pandan leaves so the flavour was more pronounced ^^" The only thing was I didn't have a smaller round chiffon cake tin so the height wasn't there.
Pandan Chocolate Zebra Chiffon cake
Recipe adapted from Sweet Samsations

1. Beat egg yolks and sugar in until pale in colour and sugar has been completely dissolved. 2. Mix in coconut milk, pandan juice, essence, vegetable oil, and salt.
3. Sift in plain flour and baking powder, fold until combined.
﻿ 4. Using an electric mixer, beat egg whites till frothy, adding a third of the sugar and all of the cream of tartar in. ﻿﻿﻿
5. Continue to beat and gradually add the remaining sugar, beating until stiff peaks form.
﻿ 6. Fold in 1/3 of the meringue to egg yolk mixture, fold till just incorporated. Repeat the same for the remaining meringue.
﻿ 7. Divide the batter into half and mix in cocoa powder with one half.
﻿ 8. Add 1 tablespoon of each batter on the same spot in chiffon pan, piling them up on top of one another, until they are both used up. Bang it on tabletop twice to release air bubbles.
﻿ 9. Bake in preheated oven at 175oC for about 40 mins.
10. Invert the cake immediately once taken out from the oven. Cool completely before removing from mould.

I think the pandan flavour was stronger the next day! But really love this cake :) 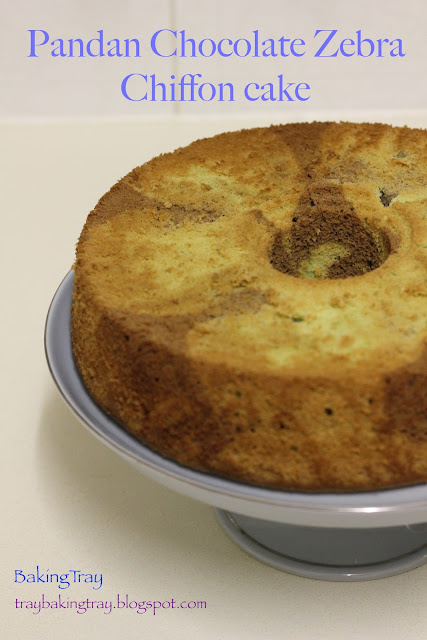 Time to make some Indonesian sweets =) 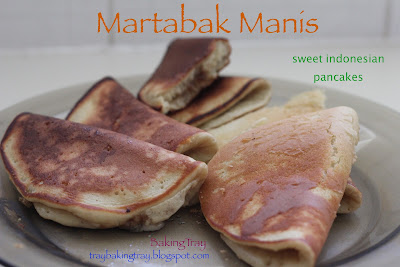 I've never tried a real Martabak Manis... So not too sure if I made it right =S but all I can say is that it was quite delicious :) It tasted like a really fluffy pancake ^^" You can be creative with the fillings - not too sure what the traditional ones have as fillings but I had cheese/brown sugar/peanut butter.

I had a request to make a friend's birthday cake last month. This request was made quite some time ago (I think since last year) so I was looking forward to making it. I've always wanted to make a red velvet cake, it's one of those classic bakes. I've baked red velvet cupcakes before, but wasn't too happy with the "redness". 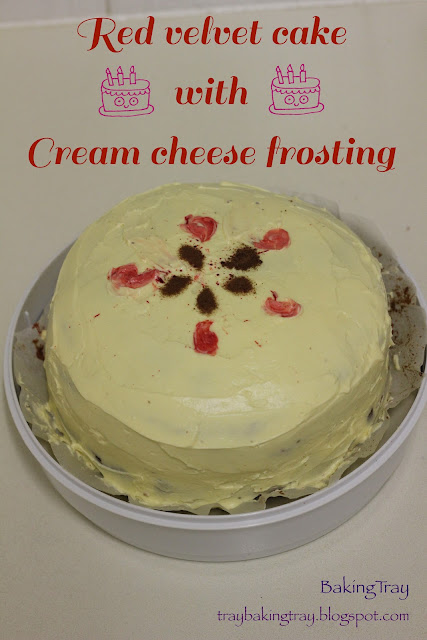 This cake turned out slightly more red but still more brown :\ I think it's the food dye I used. Next time I think I'll find a red food gel instead of liquid. My FAVOURITE thing about this cake is the FROSTING! Cream cheese frosting <3 <3 <3 =D 1. Preheat oven to 180oC. Grease and line 2 round cake tins.
2. Cream butter with sugar until light and fluffy. Add in eggs and beat.
3. Combine cocoa powder and red food colouring to make a paste. Add it to the creamed mixture and mix well.
4. Combine salt, vanilla and buttermilk. Add flour to buttermilk mixture. Mix well and then add to creamed mixture.
5. Mix baking soda and vinegar. Fold into the cake batter.
6. Pour cake mixture into cake tins and bake for 30 minutes. Allow cake to cool completely before icing.

1. Beat cream cheese until softened. Gradually add butter and beat until smooth.
2. Sift in icing sugar and continue to beat.
3. Add vanilla and stir to combine.

The cake is now ready to frost =D Spread 1/3 frosting on first layer then add second cake layer and frost all around :)