And so here is the LOOONNNGG awaited blog! very sorry about the delay! (just adds to the suspense :P)
This is the famous recipe I have been using for my macarons!! I guess business will be down since you guys will know how to make it =p Everyone thinks that macarons are hard... I don't think they are THAT difficult (come on.. if I can do it so can YOU!!!) but there are a few tips and tricks that i have discovered along the way that will help you NOT to fail! 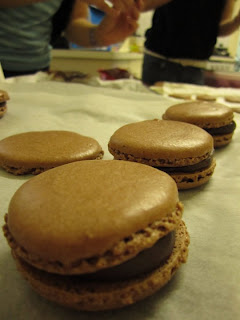 
1. Sift icing sugar and almond meal 3 times (the original recipe does not state this but I do it just to be safe and to allow more air into the mixture) into a large bowl. 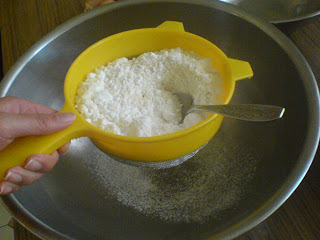 2. Add a pinch of salt to the egg whites in a nice clean and dry bowl. Using an electric beater, whisk egg whites till they just hold a stiff peak. Then gradually add the caster sugar while whisking. IMPORTANT: do not overbeat egg whites forming a meringue mixture.. and do not under beat otherwise the mix will be too wet. 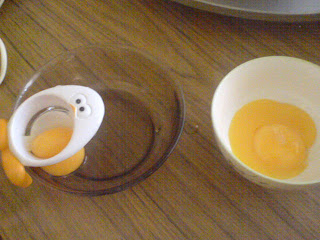 3. Carefully fold in the almond mixture into the egg whites - (don't mix too hard because you want to retain as much air as possible). The mixture should be thick and glossy. Sift in cocoa and mix - (don't be tempted to add heaps of cocoa to make it more chocolately because this can ruin the texture of the macarons). 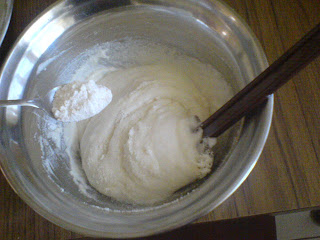 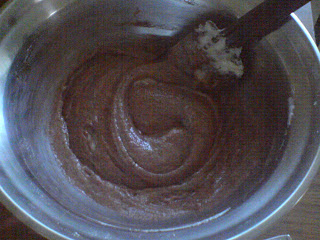 4. Pipe or spoon the mix onto pre-lined baking trays. Try to keep even sizes so you can match them up later. Tap the tray onto the bench once to release any air bubbles. Leave at room temperature for 30 min - 1 hour (IMPORTANT STEP!!!) till a shell forms - when you touch the macaron shell, it won't be sticky). 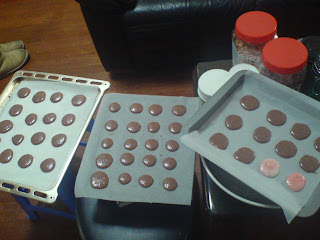 5. Bake in pre-heated oven at 170oC for 10 minutes on the middle shelf. Bake one tray at a time.
6. Sandwich a pair of macarons with chocolate ganache (150ml cream + 375g chocolate heated over a double boiler)

The best feeling is when you are crouching down looking into the oven and you see that your macaron has RISEN!! if it hasn't.. don't worry!!!! just try again =D =D

Posted by BakingTray at 6:16 PM