Work Catering #39: have a break! Have a KitKat .. cheesecake!

Sorry... another cheesecake post! But this one is different!! it's got KITKAT bars in it XD I have made a similar cheesecake using Tim Tams.. and Cherry Ripes. Any other suggestions for chocolate bars? =P 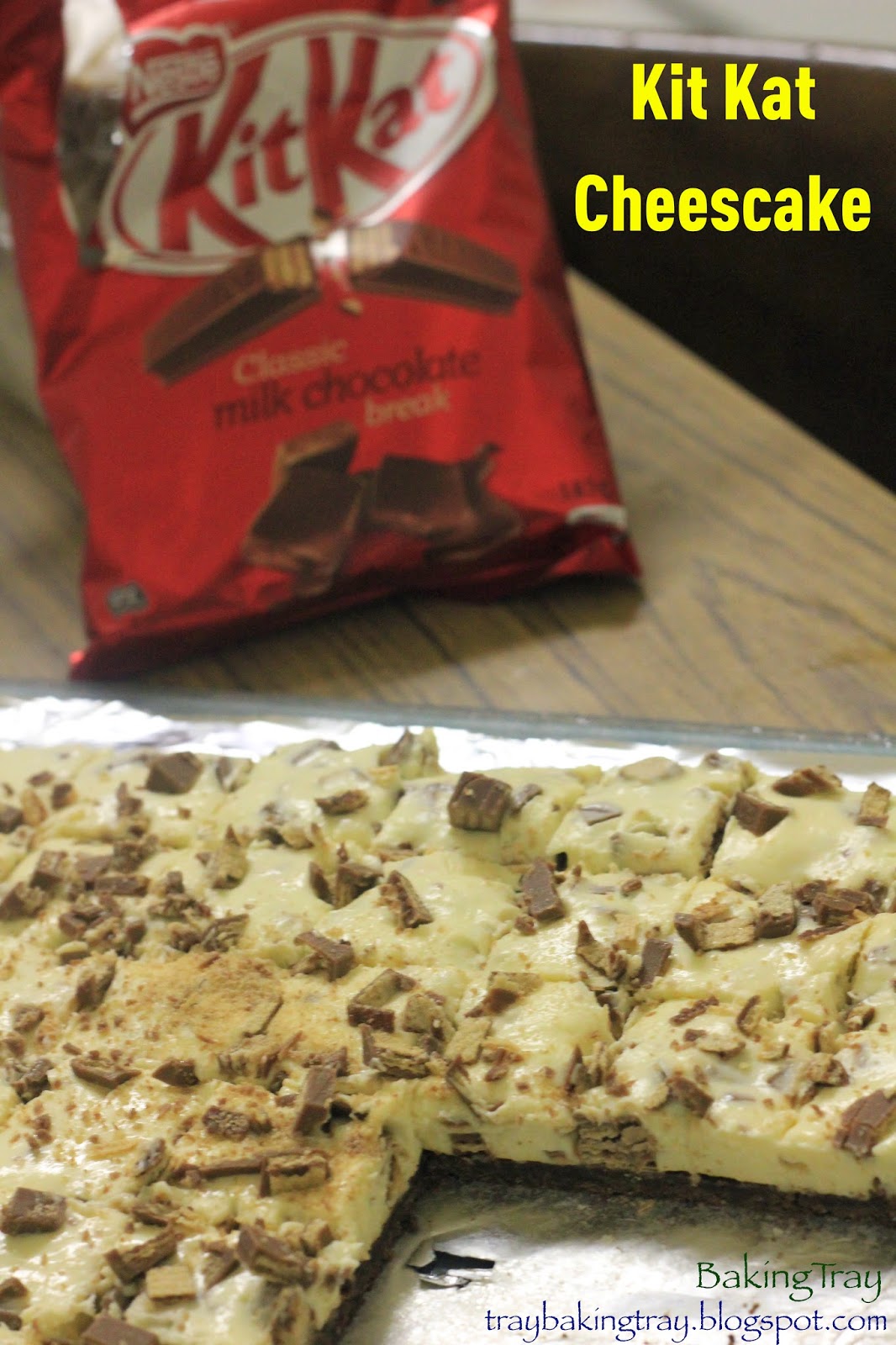 Also made some blueberry cookies. I always enjoy putting fruit into cookies but usually I used dried fruit however this time I tried out fresh fruit! Enjoy the recipes :D 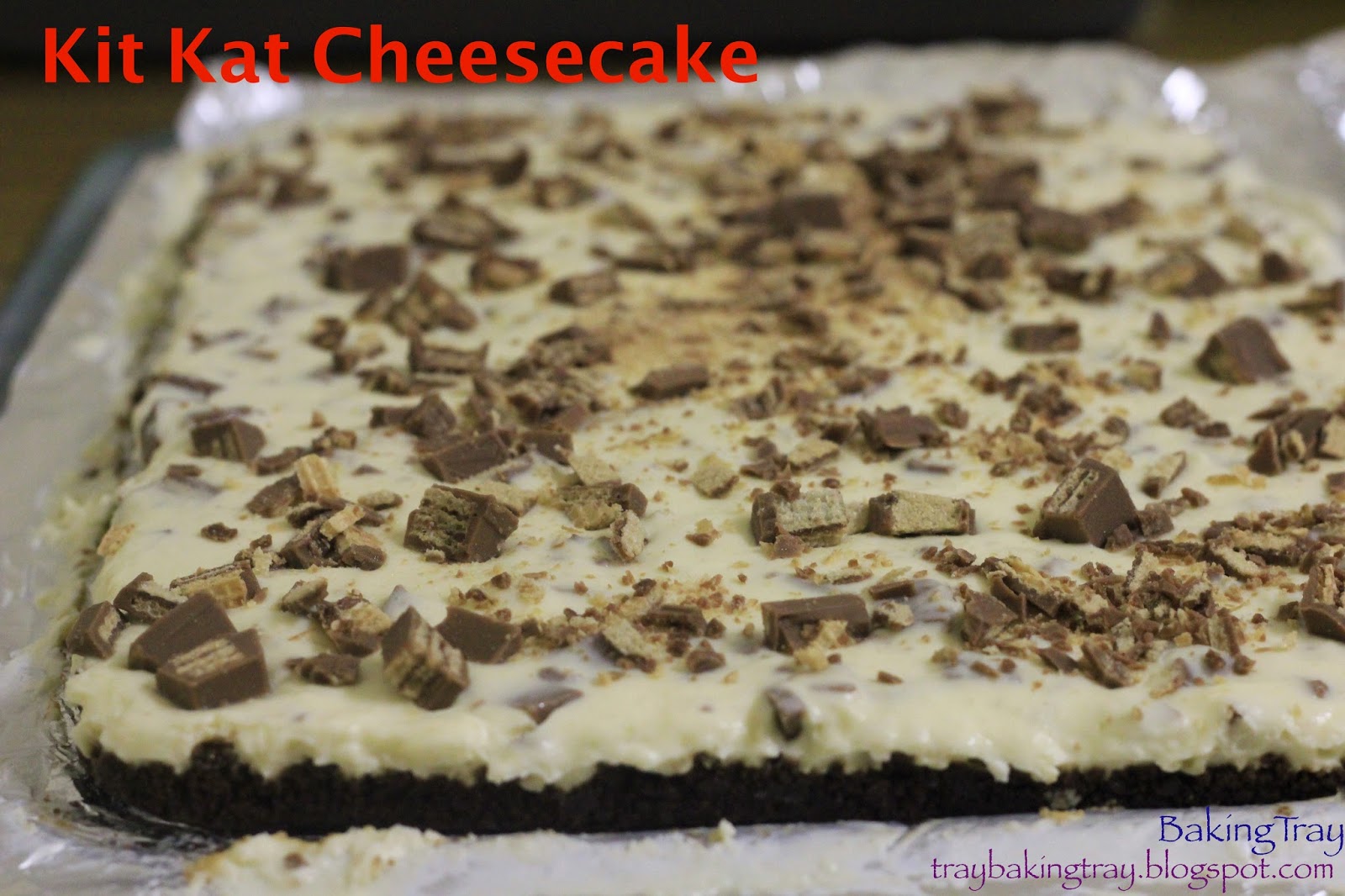 1. Line a 20x30cm pan with foil.
2. Process/Crush chocolate biscuits until fine. Add butter and process until well combined. Press mixture firmly over the base of prepared pan. Refrigerate while making filling.
3. Beat cream cheese with electric mixer until smooth. Beat in condensed milk and cream until well combined. Dissolve gelatine in water, then add to cream cheese mix. Beat in vanilla then fold in chopped Kit Kat pieces.
4. Carefully pour mixture into prepared base. Sprinkle with extra Kit Kat pieces and refrigerate for 4 hours or overnight. Cut in squares and serve. 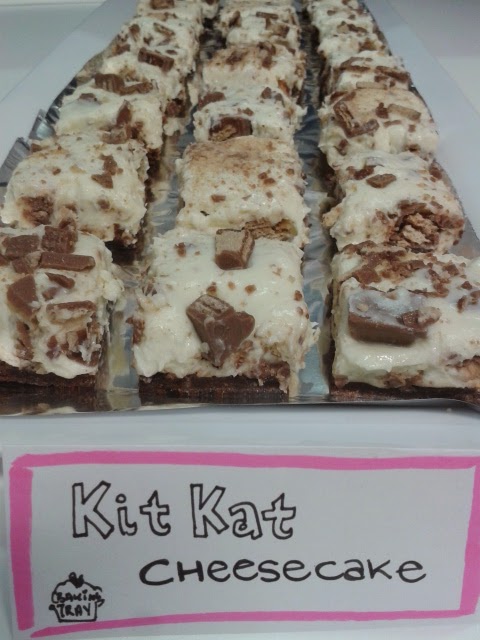 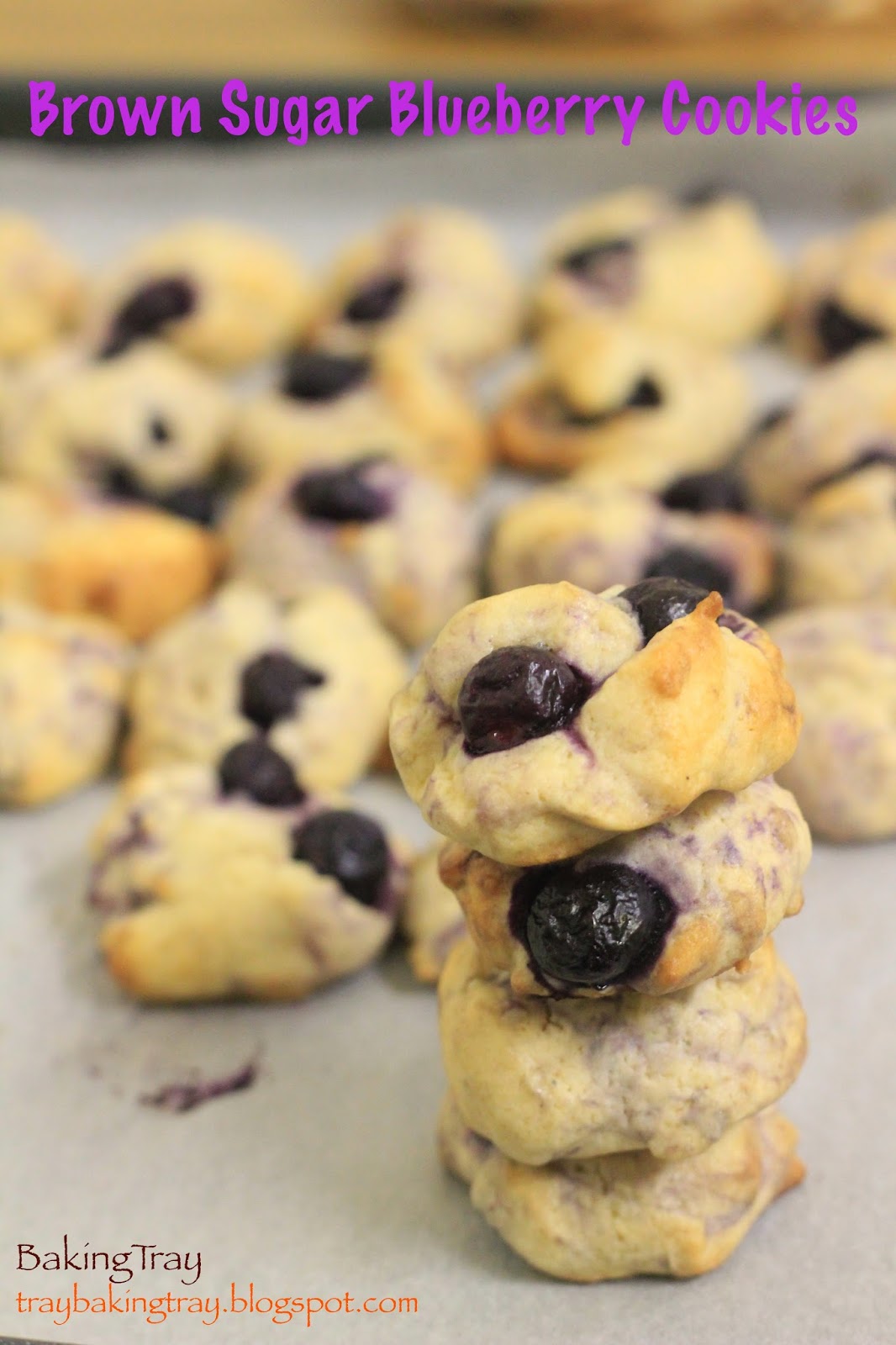 1. Preheat oven to 190oC. Line 2 baking trays with baking paper.
2. Beat butter and sugar with an electric mixer until smooth. Add egg and vanilla and mix well to combine.
3. Stir in flour, baking powder, salt and cinnamon with mixer on low speed. Mix until dough comes together then add milk. If dough still dry and crumbly, add 1 tbs milk at a time until it comes together.
4. Carefully fold in blueberries. Refrigerate for 30 minutes.
5. Remove dough from fridge. Roll teaspoonful of dough and place on baking tray. Bake for 10-12 minutes or until golden. 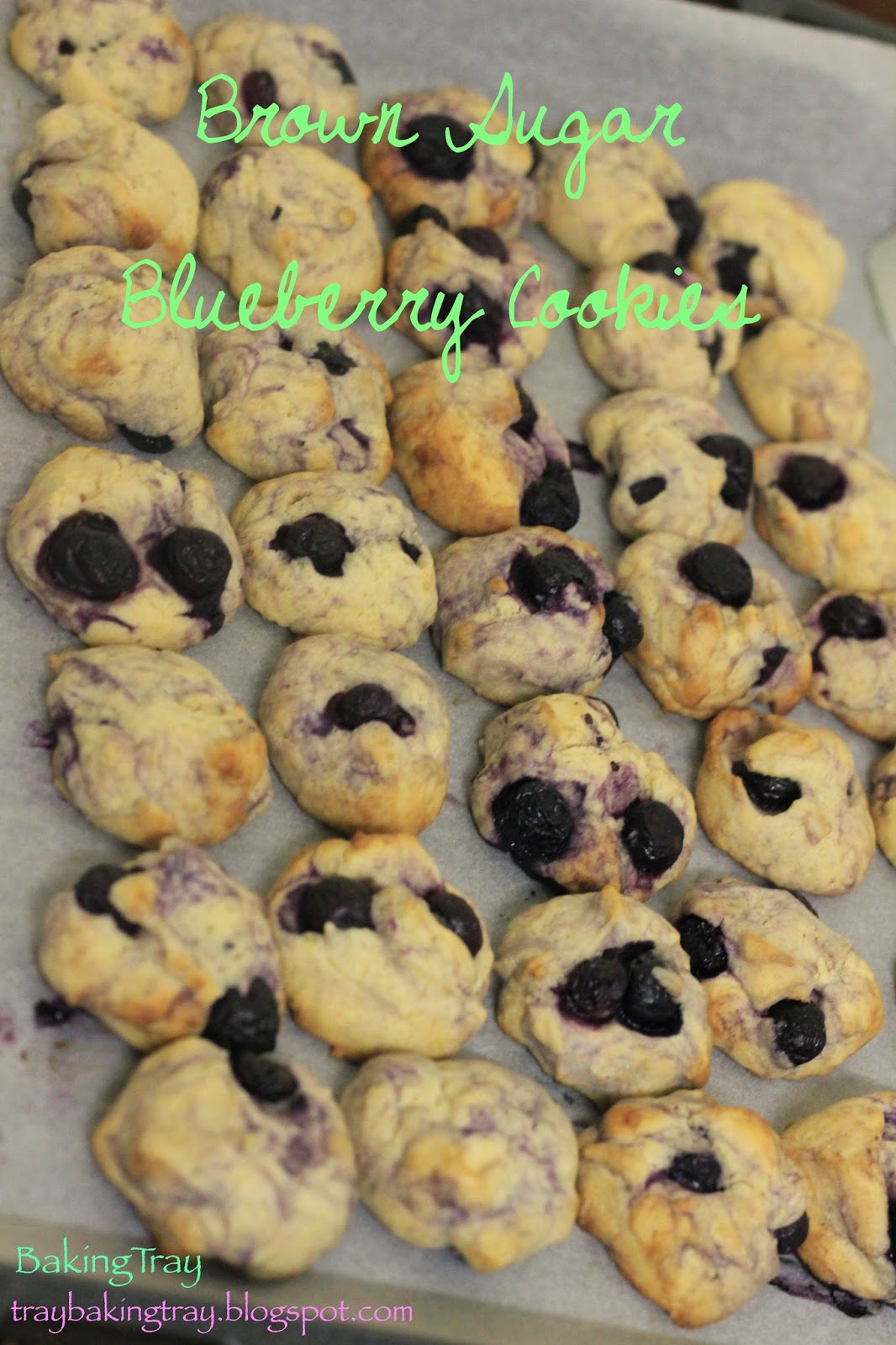 I'm not sure if it was because I used frozen blueberries, but the cookies were a bit soft. I think the moisture from the frozen blueberries may have softened the cookies after they were baked however the flavours were still there. It actually tasted like cookie dough so I didn't mind ^^ The cinnamon, brown sugar and blueberry went really well together. 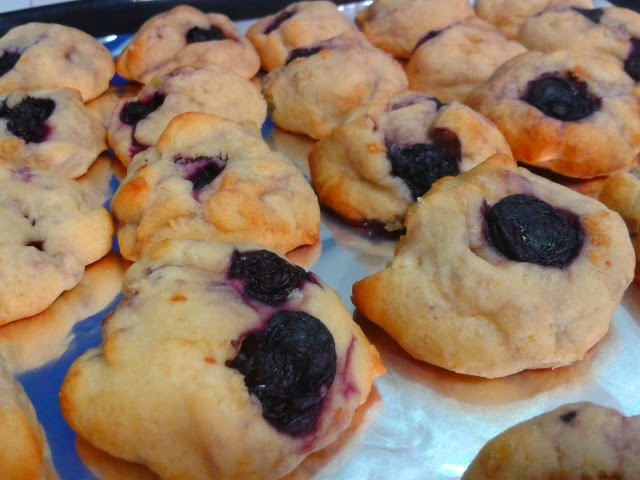 Posted by BakingTray at 7:17 PM No comments:

If you have been reading my blog, you will know that I LOVEEEE CHEESECAKE!!! It's the one cake that I could live off if I was ever stuck on a deserted island... and I wouldn't be sick of it XD There are just SOOO many different cheesecakes out there! Baked.. frozen...chocolate.. fruity... mini... slice...  the list goes on! 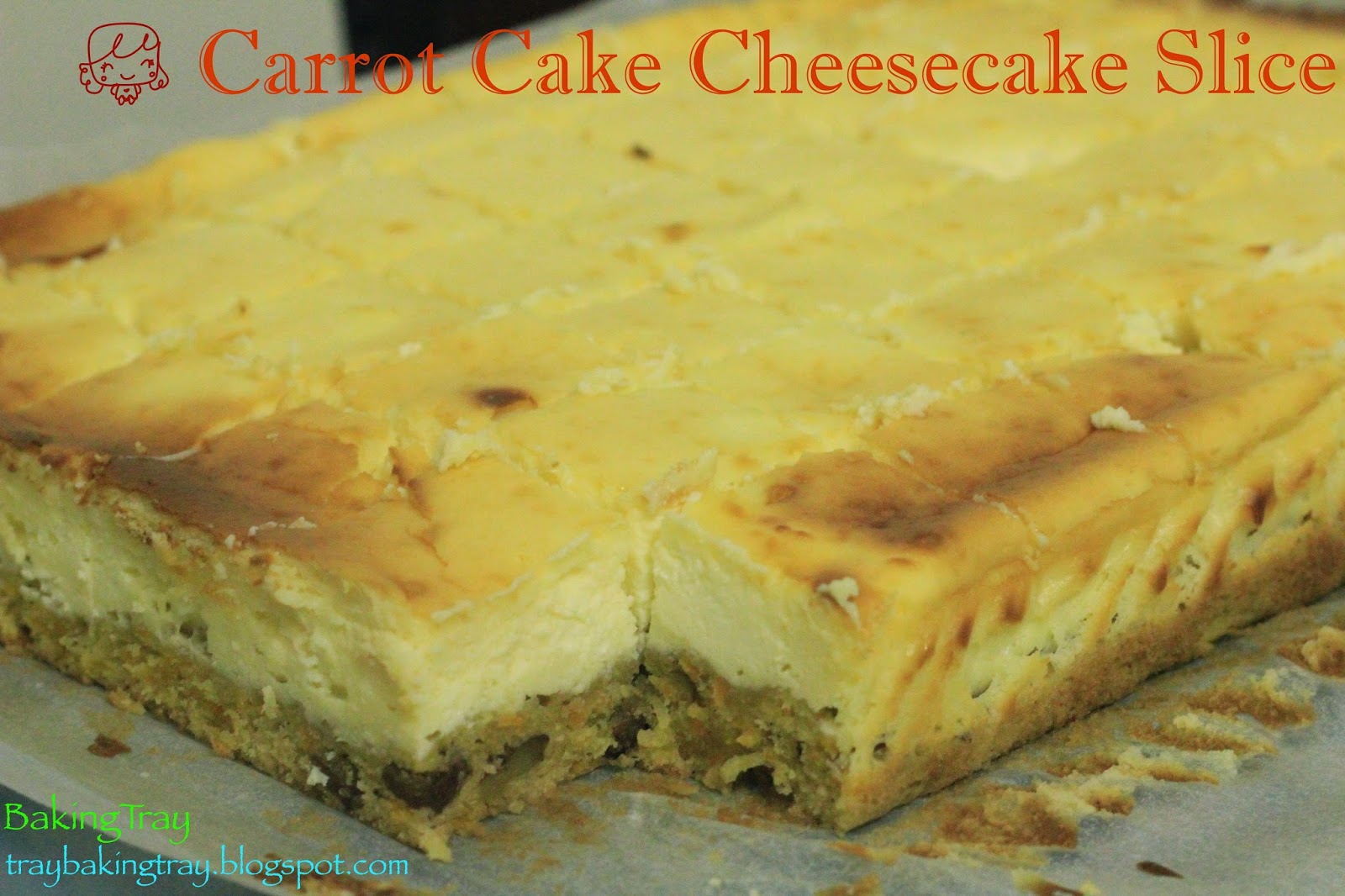 So for catering this week I decided to bake a classic carrot cake with a twist. Surprisingly I have not made carrot cake before! (GASP! I KNOW!) It's such a classic and I love the cream cheese frosting (MY FAVOURITE FROSTING!) so I discovered this recipe that combined carrot cake with cheesecake - a twist on the original cream cheese frosting. The base is carrot cake, while the topping is baked cheesecake. This slice is best served chilled so try and be patient and chill in fridge before eating ^^ if you can...
Carrot cake cheesecake slice
Recipe adapted from The Sweets Life

1. Preheat oven to 180oC and line rectangular baking pan (20x30cm) with baking paper.
2. Beat all carrot cake ingredients in a large bowl with an electric mixture until a thick dough forms (a stand mixer is great for this). Press dough into prepared pan, spreading an even layer. Set aside while you prepare filling.
3. In a separate bowl, beat cream cheese with electric mixer until fluffy. Beat in condensed milk until smooth. Make sure to scrape down sides of bowl. Add sour cream, salt, vanilla and eggs. Mix until combined.
4. Pour cheesecake mixture over the carrot cake base, spreading evenly. Bake for 20-25 minutes, or until just set. The centre should have a slight wobble.
5. Allow to cool completely before covering and refrigerating until bars are set, for 2-3 hours or best overnight. Cut into squares and serve chilled.

Next up are these cute little choc cheesecake cups! The smaller the dessert.. the more you can eat right? XD These are just the right size and no bake! You could make them in larger cups or even a cake tin, just double the recipe. 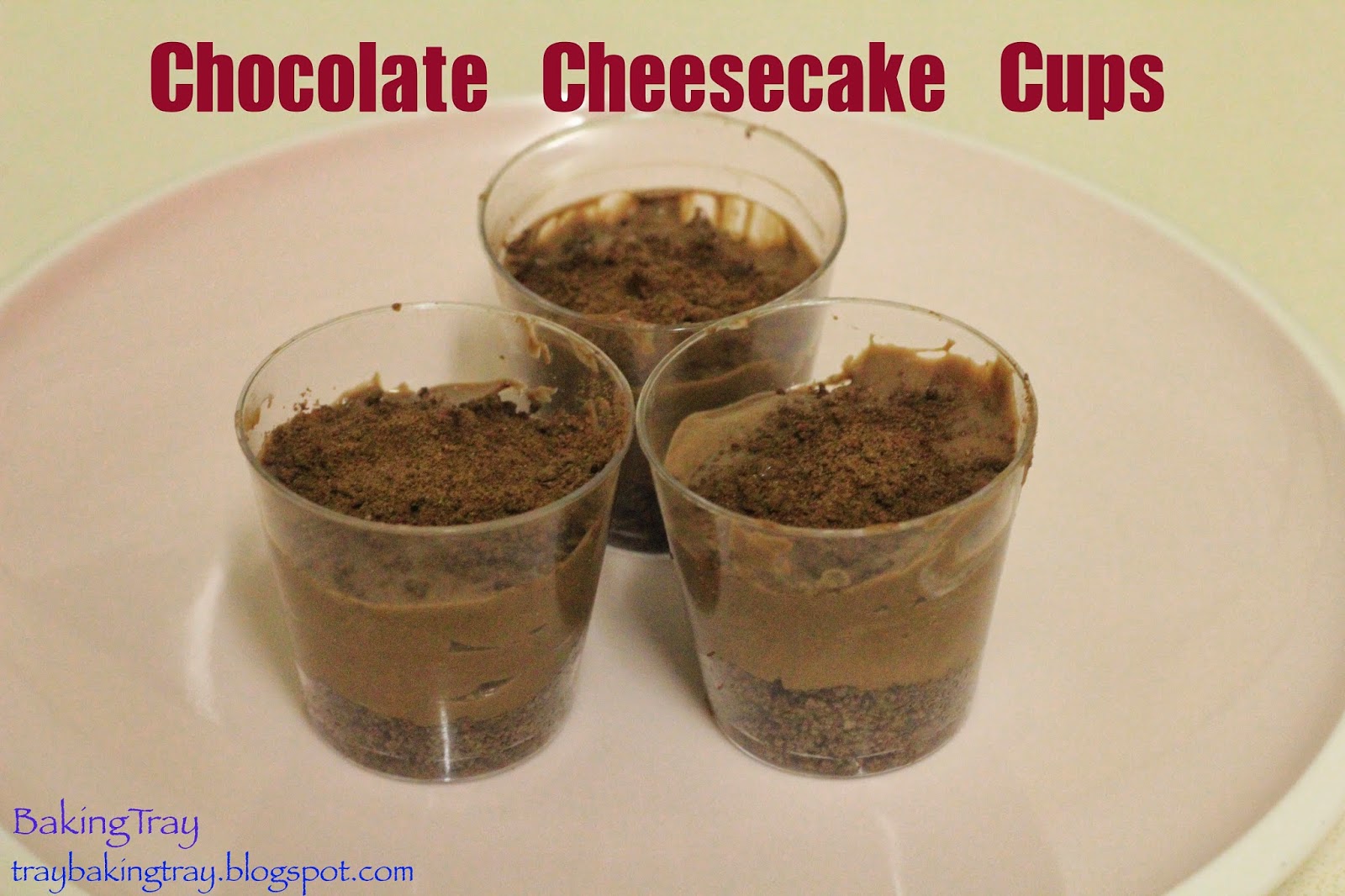 1. Process/Crush biscuits with cocoa powder until fine. Add melted butter and mix well. Press 1/2 tsp into base of small cups.
2. Beat thickened cream until soft peaks form and refrigerate. Melt chocolate in microwave and allow to cool.
3. Beat cream cheese until smooth. Add in icing sugar and vanilla and beat until combined.
4. Mix melted chocolate into cream cheese mixture until combined.
5. Mix 1/3 of cream into mixture. Add remaining cream and fold until no white streaks remain.
6. Carefully spoon cream cheese mixture into cups. Dust with milo and refrigerate for at least 8 hours before serving.

So get out there!! Make some cheesecake!! :D I'm sure I'll have many more cheesecake recipes to come! But here's some you can check out :) 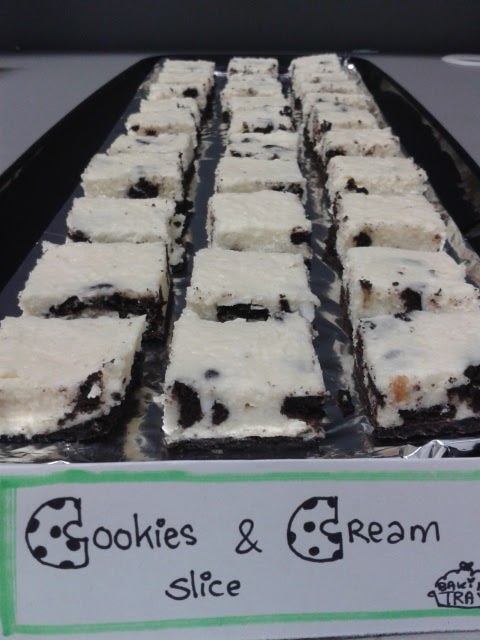 I think these are the most delicious pancakes I have made in a long time! Thanks to the recipe by the SORTED guys! A cross between a Cinnamon scroll + Pancake = Cinnamoncake! It's quick and easy and the pancakes were really light and fluffy due to the buttermilk. If you don't have any buttermilk you can MAKE YOUR OWN! Yes!! Just add 1/2 tbs of white vinegar or lemon juice to the 150ml of milk and let it stand for 5 minutes.... then TA DA~~ just like magic it turns into buttermilk ^__^ 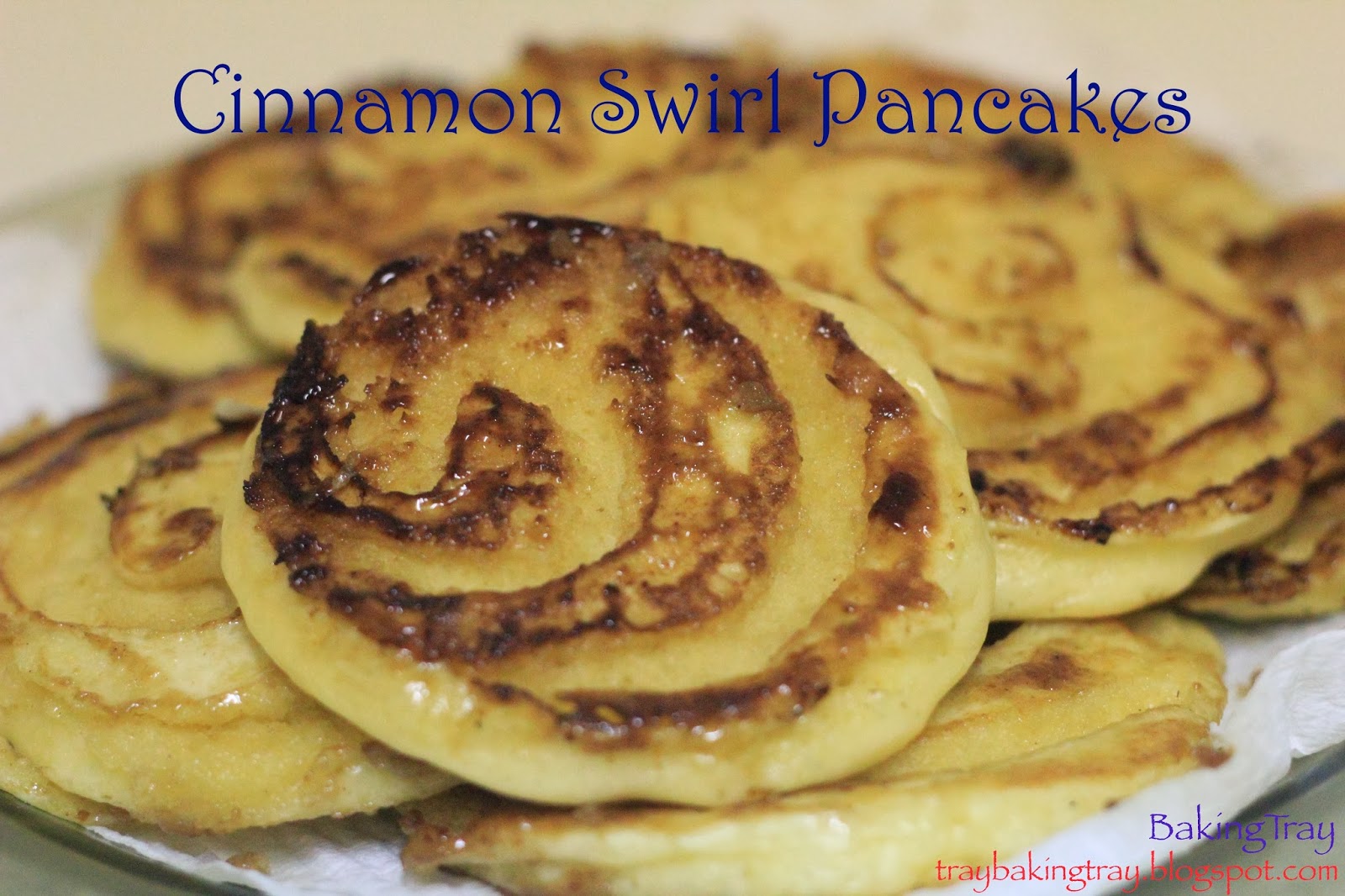 1. In a small bowl, beat butter, sugar and cinnamon together till smooth and lump free. Transfer mix to piping bag/sandwich bag and set aside.
2. Mix flour and baking powder in separate bowl. Crack in the eggs and stir to mix. Keep whisking while you slowly add the buttermilk. Add pinch of salt and mix until smooth batter.
3. Heat large, non-stick frying pan to medium heat. Rub with butter. Spoon heaped tablespoon of pancake mixture into pan and cook for 30 seconds. Pipe a thin line of spiral on top of raw batter and leave for another 30 seconds.
4. Flip pancake over quickly and cook for another 30 seconds. Transfer cooked pancake to plate. Wipe pan clean to get rid of any burnt sugar and repeat process to cook the rest of pancakes.

My pancakes didn't exactly look like theirs because I didn't have DARK brown sugar, hence the piping mixture is quite light.. and I also forgot to wipe the pan clean so there was a bit of caramelisation happening.. :/ but all in all... yummy fluffy pancakes =D and addictive!!!
Anyways it's a public holiday todayyy~~~ so for those in Victoria.. enjoy it :D maybe make some pancakes... or bake some cookies or bread!! or go out and have some brunch =) such a lovely day~~~ as for me! Gonna do some BAKING!! YAY!!!
Posted by BakingTray at 11:12 AM No comments:

Yet another recipe from Sally's baking addiction! I think I might have an addiction.. to this BLOG! hahah Must give her full credit~ there's just so many recipes that I want to bake after looking at the photos. They make you *DROOL*! and they also don't seem too difficult! 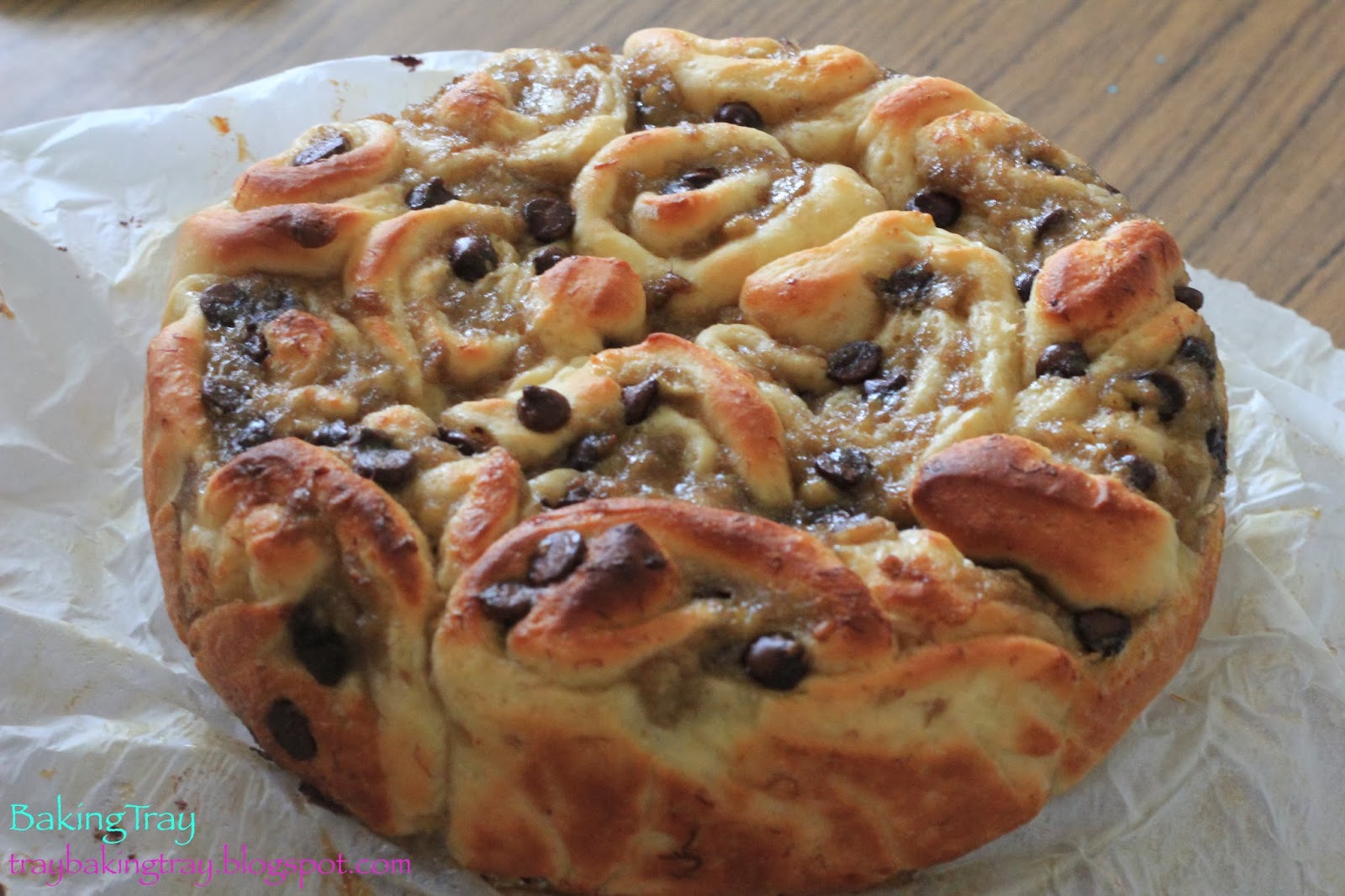 1. Make dough by adding flour, sugar, salt and yeast in a bowl.
2. Heat water, milk and butter together in a microwave until butter is melted. Stir the butter mixture into the flour mixture. Add the egg and enough of the extra flour to make  a soft dough. Dough will be ready when it gently pulls away from the side of the bowl and has elastic consistency.
3. On a lightly floured surface, knead dough for about 5-6 minutes. Place in bowl, cover with cling wrap and allow to rise for around 10 minutes.
4. Roll the dough out into a rectangular shape. In a small bowl, mix mashed banana with softened butter and spread over dough. Mix together the cinnamon and sugar and sprinkle over the top. Sprinkle over the chocolate chips. Roll up the dough tightly. Cut into 12 even pieces and plate in lined round cake tin. Loosely over rolls with foil and allow to rise in warm place for 60-90 minutes.
5. After the rolls have doubled in size, preheat oven to 190oC. Bake for 25-30 minutes and lightly browned. Cover rolls with foil after 15 minutes to avoid tops burning.
I found the filling a little bit wet so maybe next time I won't mash the bananas up too much. Also feedback from the family was that the flavours don't really match.. but I think they do!! I guess it might have been a bit too sweet.... so next time I'll try berries! or even savoury cheesey ones! mmmm~~ the rolls were deliciously soft and fluffy though :D
Anyways if you have any suggestions just leave a comment =D Till next time~~
Posted by BakingTray at 7:01 PM No comments: