Have you ever just felt burnt out? I'm sure you have, especially when it comes to studying or working... but have you ever feel burnt out when it's your.. hobby? your passion? I  didn't think that would happen but sometimes it does! Like with baking.. I do love it and I could do it everyday (I think).. but sometime I lose motivation or inspiration. For example this week for work, I wasn't really inspired by anything so just chose these 2 random recipes to bake. I wasn't really happy with either of the final products because I think I was just baking out of "having to bake" instead of "wanting to bake"~~~ I think it was because I baked so much for the wedding (yes i know... still need to blog about that)

anyways I hope you can try out these recipes and it turns out better for you ^___^ Hope I get my baking motivation back soon!!! :D 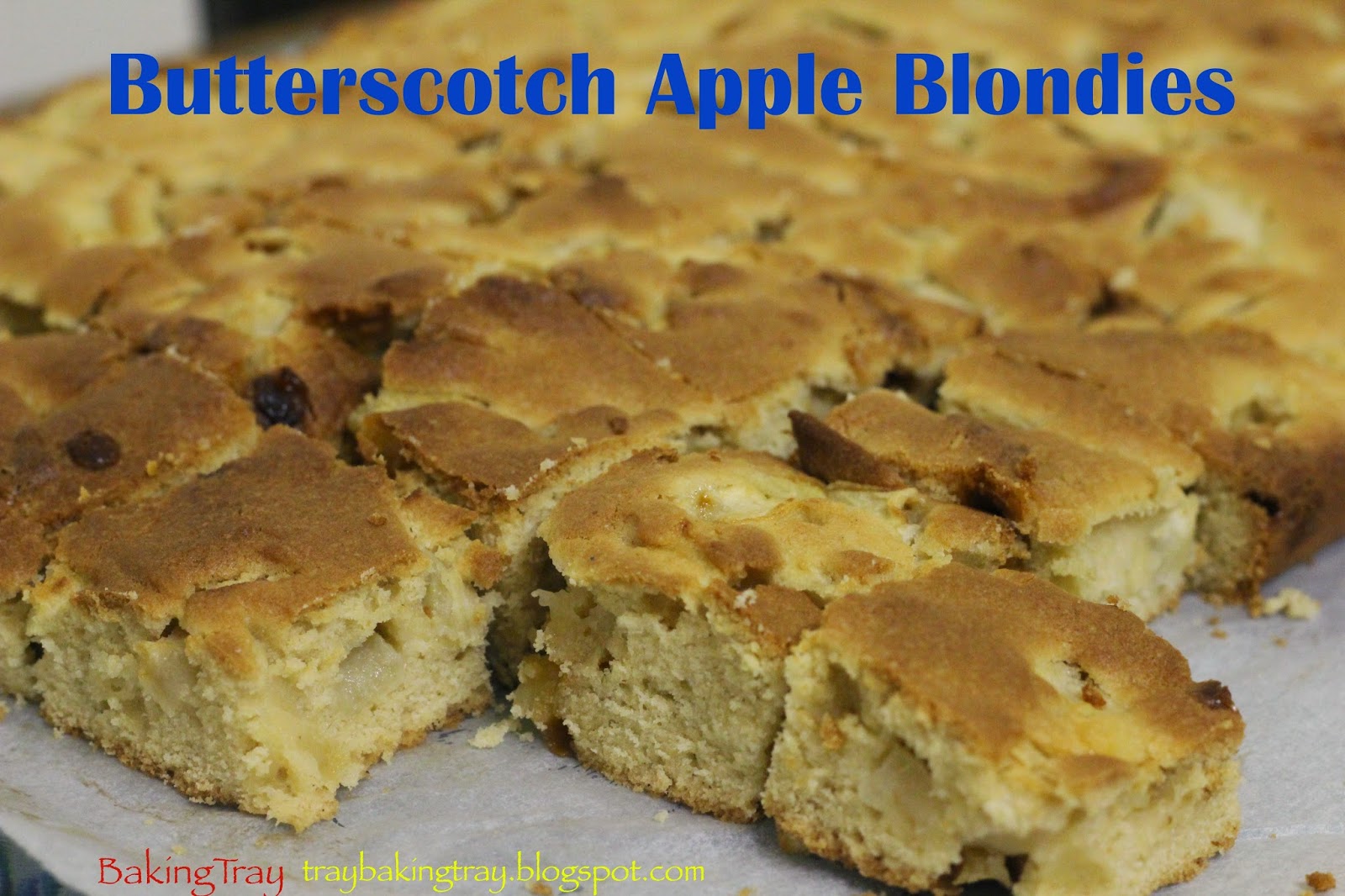 1. Preheat oven to 180oC. Grease and line rectangle (20x30cm) baking pan.
2. Cream brown sugar and butter with electric mixer until light and fluffy. Add eggs one at a time and beat well. Beat in vanilla essence.
3. Mix in baking powder, salt and flour. Fold in apples and butterscotch bites.
4. Pour/press batter into prepared pan. Bake for 30-35 minutes until the edges are golden brown. Cool bars completely before cutting. 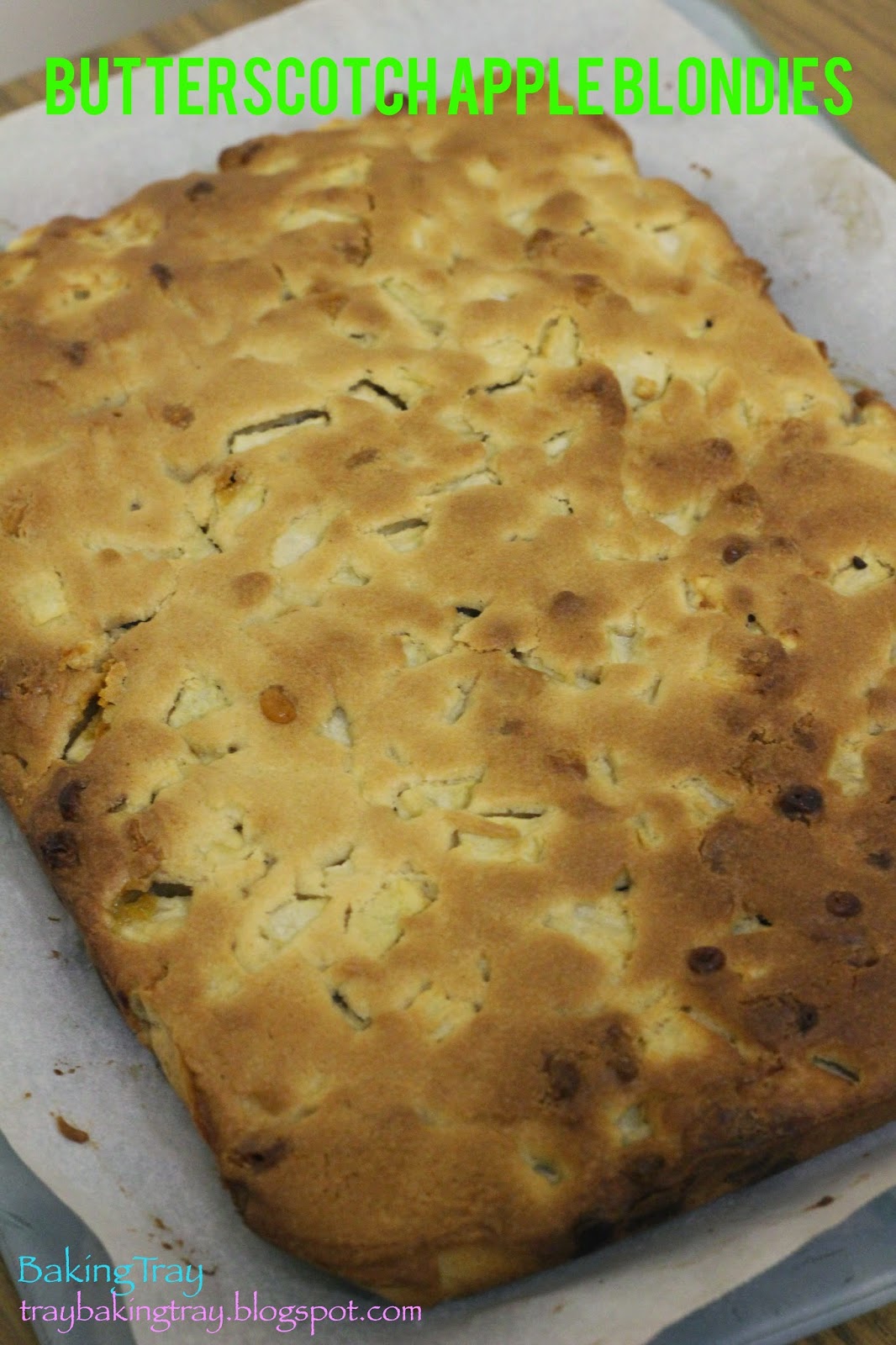 In the original recipe, there was an optional caramel sauce but I didn't make it (partly because I was lazy..). I'm sure it would have been great with it! 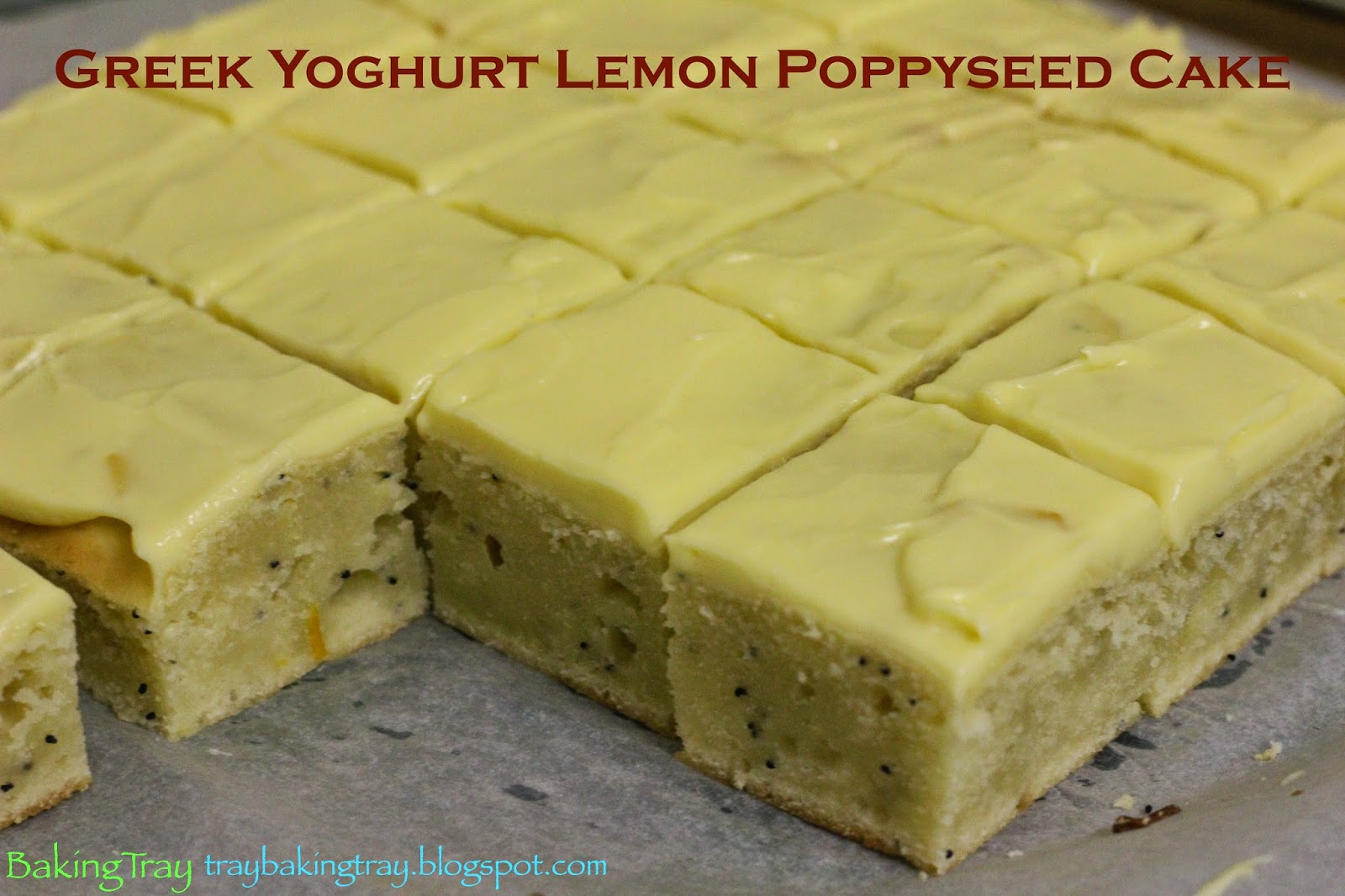 1. Preheat oven to 180oC. Grease and line square (23cm) cake tin.
2. Whisk together flour, baking powder and salt in medium bowl.
3. In a separate bowl, whisk together the sugar and eggs until well-combined. Whisk in melted butter, lemon zest and almond extract.
4. Whisk in one third of flour mixture, followed by half of yoghurt and poppyseeds. Whisk another third of flour mixture then remaining yoghurt and rest of the flour. Mix just until no streaks of flour remain. Pour into prepared pan.
5. Bake for 50-55minutes or until toothpick inserted into the center of loaf comes out clean.
Optional: Ice with cream cheese frosting - the reason I did this was because my cake turned out really dense :S I think I didn't whisk enough to get air in... so to mask my failure, I smothered it with frosting. muahhaha =p Baker's secret~
Posted by BakingTray at 7:13 PM No comments:

Work Catering #52: A year of catering~

It's been 52 weeks... a year since work catering!! wow...... anyways I'm always looking for inspirations for bakes so if you ever find a recipe or idea that seems interesting, let me know! :D I have a friend who sends me dessert pics all the time ^^ love it!

The two bakes this week are really simple recipes but delicious~ They don't need many ingredients but most of the ingredients you can find in your pantry! Let's start off with a simple and moist chocolate cake :) 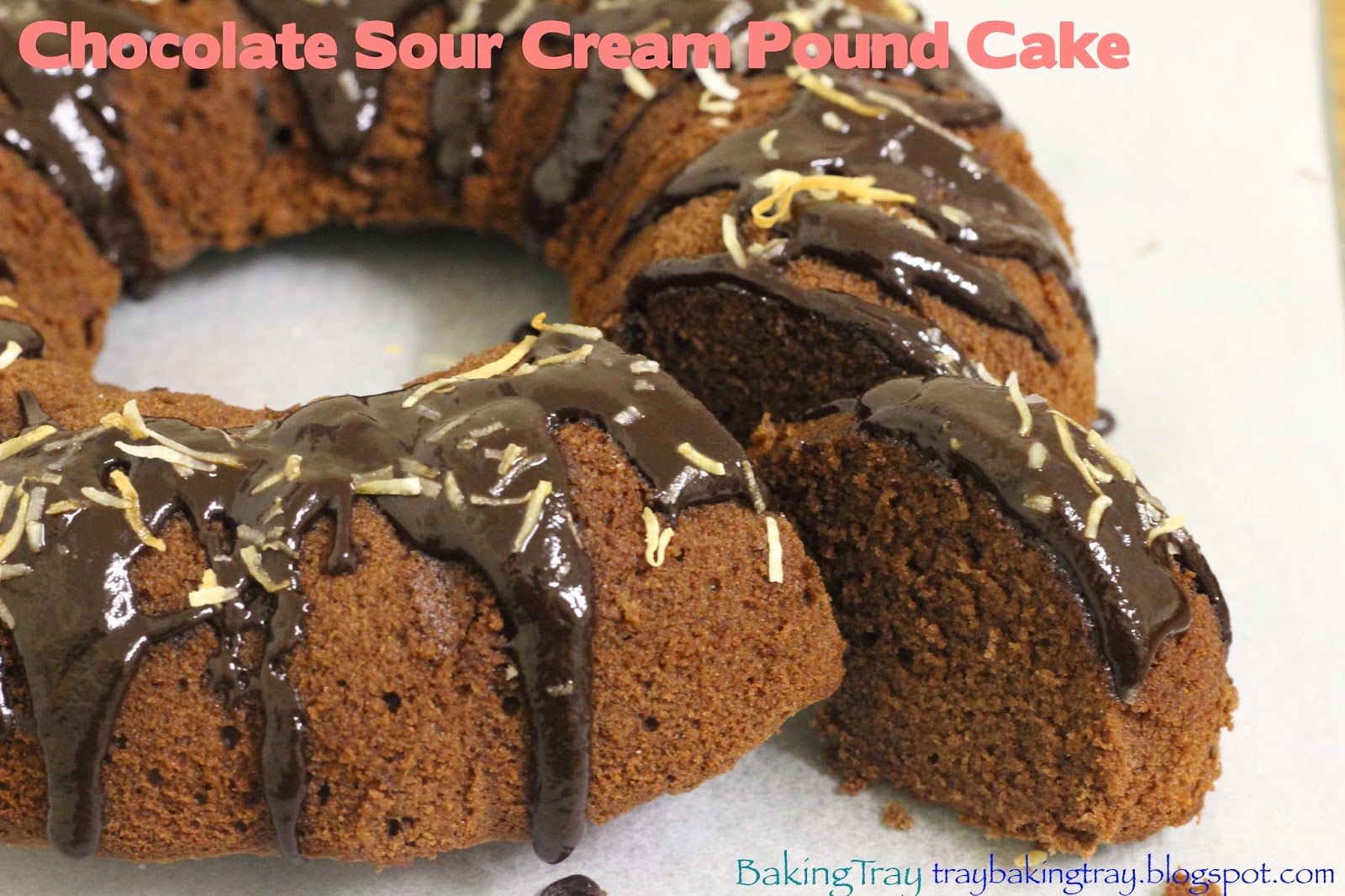 1. Preheat oven to 165oC. Grease bundt tin.
2. Sift together cocoa powder, salt and baking powder. Set aside.
3. In a separate bowl, cream butter, sour cream and sugar together until light and fluffy. 4. Beat in eggs one at a time. Beat in vanilla essence until well combined.
5. Fold in flour mixture until combined. Pour batter into pan. Bake for 30-35 minutes or until skewer inserted into the centre comes out clean. Leave to cool in pan for 5 minutes then remove and allow to cool on wire rack. 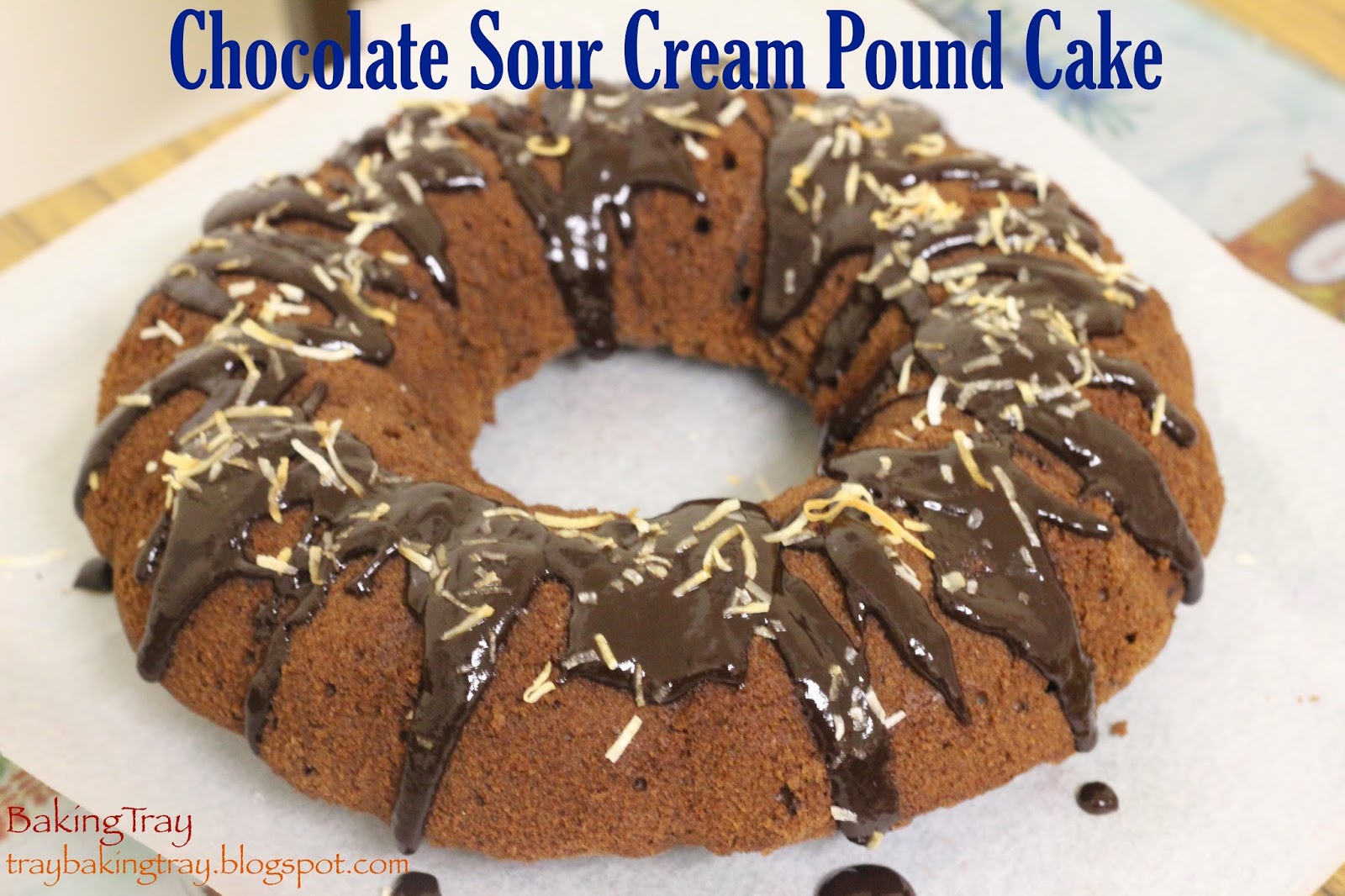 This cake was light and fluffy and really simple to make. I drizzled on some chocolate ganache and sprinkled toasted coconut on top for decoration ^^ Makes the cake look more tasty right? haha
Next up are these addictive Nutella shortbread cookies with even less ingredients and less steps than the cake! 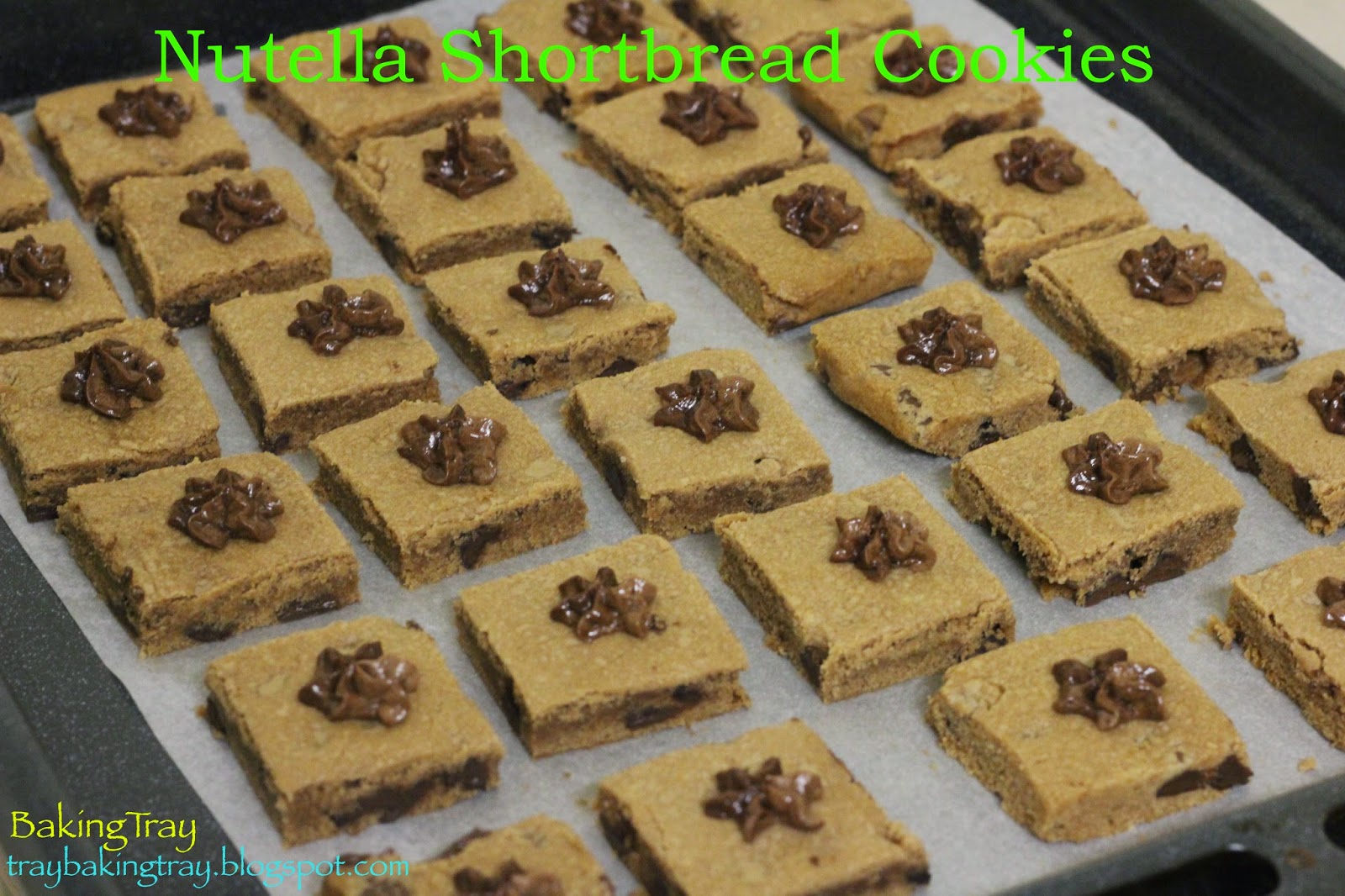 1. Beat butter and sugar together until smooth. Beat in vanilla and Nutella.
2. Stir in flour and mix until dough comes together. Mix in chocolate chips.
3. Place dough between 2 sheets of baking paper. Roll the dough into a rectangle shape about 1/2 cm thick. Refrigerate dough for at least 2 hours.
4. Preheat oven to 160oC. Cut dough into 5x5cm squares. Bake for 18-20 minutes or until cookies turn brown at the edges.

I topped my shortbread biscuits with a squirt of chocolate frosting piped on with a star nozzle. It made it look a little bit more fancy and also added a bit of moisture to the shortbread. 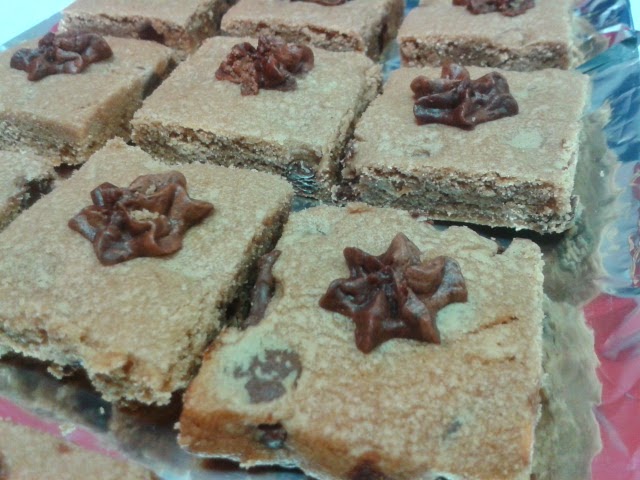 I still have so many bakes to blog about! So stay tuned :D
Posted by BakingTray at 7:15 PM No comments:

It's strawberry season! hooray~~ so time to use them in some desserts! They add delicious flavour but more importantly COLOUR :D Below is the recipe for this Strawberry Oreo Cheesecake I made. Philadelphia had a special addition Strawberry Cream cheese block so I decided to try it out. It doesn't taste that great by itself but in this cheesecake.. Mmm.. mm.. mmmm!!! I originally made it as a cake and then adapted it into a slice =) I prefer the slice! hehe 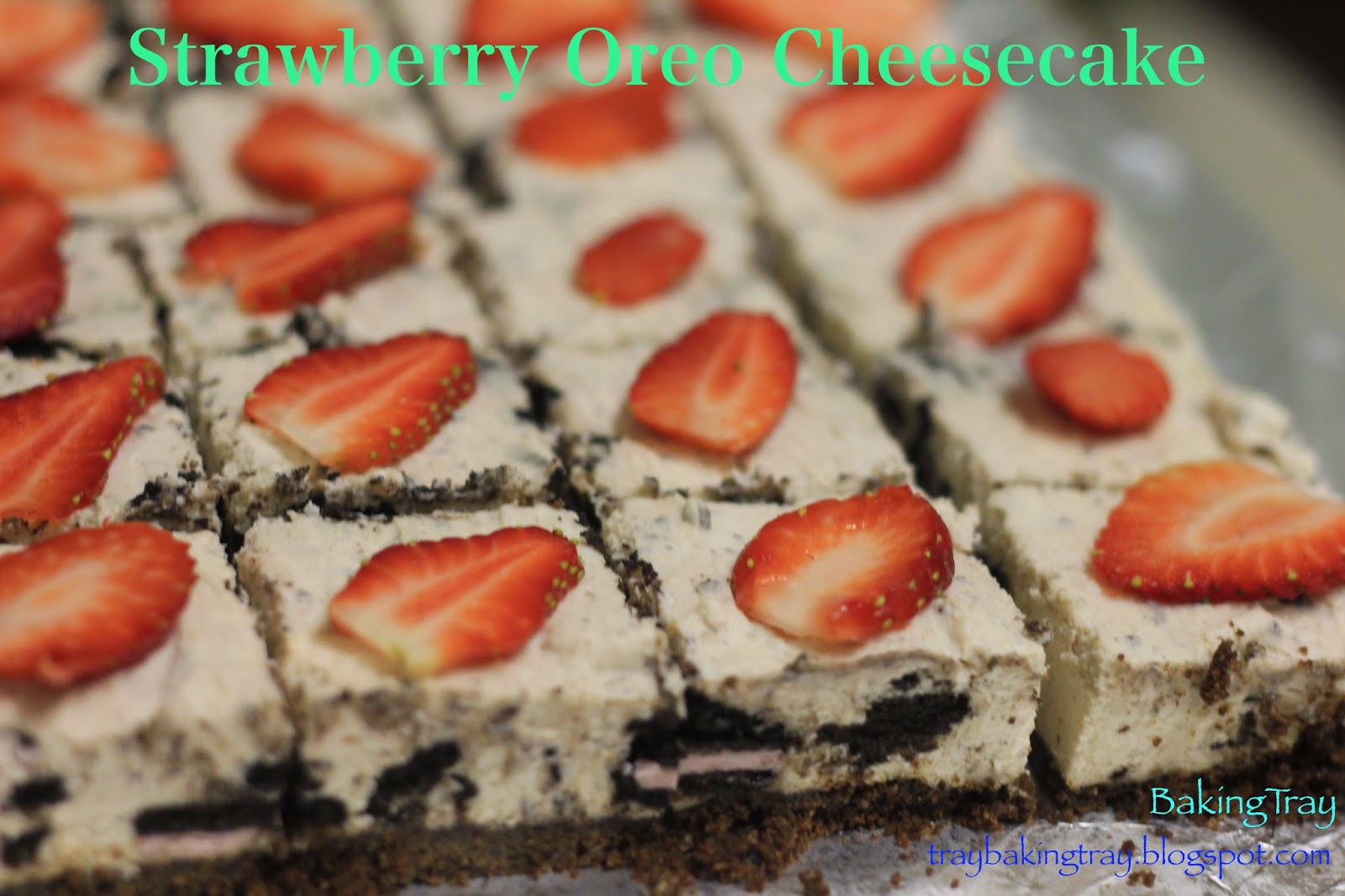 1. Line rectangular (20x30cm) baking pan with foil. (or if making a cake, a round 23cm springform/cheesecake tin)
2. Process chocolate biscuits until fine crumbs. Add melted butter and mix until combined. Press mixture over base of pan and refrigerate for at least 30 minutes.
3. Put water and gelatine in small heatproof bowl. Place bowl in small saucepan of simmering water until gelatine dissolves.
4. In a large bowl, beat cream cheese until smooth. Add in gelatine and melted chocolate and mix until smooth.
5. Whip cream in separate bowl until soft peaks formed. Gently fold into cream cheese mixture until combined.
6. Break oreos into small pieces and stir into cream cheese mixture. Pour mixture over the prepared biscuit base smoothly the mixture evenly. Refrigerate for at least 4 hours or better, overnight. Decorate with sliced strawberries.

This was a winner in so many ways! What's not to love? It's cheesecake... it had oreos... and fresh strawberries :D

My next bake was something very american! I had to wiki "snickledoodle" - a type of cookie made with butter/oil, sugar and flour rolled in cinnamon; basically a cinnamon cookie. 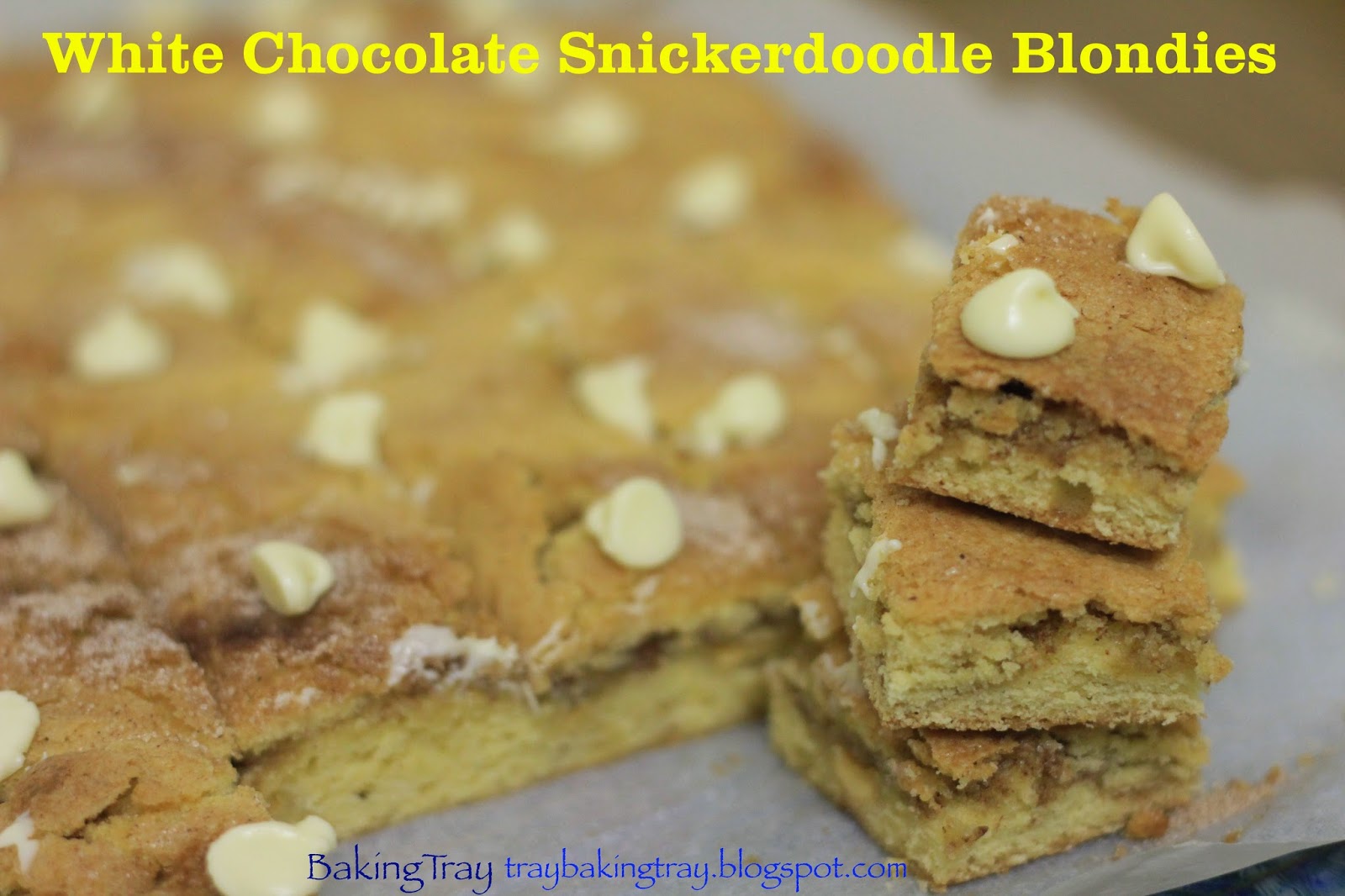 1. Preheat oven to 180oC. Grease and line rectangular (20x30cm) baking pan with baking paper.
2. Beat butter on high speed in large bowl until creamy. Add sugars and beat until light and fluffy. Beat in eggs and vanilla.
3. Fold in flour, baking powder and salt until combined. Fold in white chocolate chips. Spoon half the batter into pan evenly.
4. Combine cinnamon and sugar and sprinkle on top of bottom layer, reserving 1 tbs for the top layer. Spread remaining batter over top. Sprinkle with remaining cinnamon-sugar.
5. Bake for 25 minutes or until golden brown and toothpick inserted in centre comes out clean. 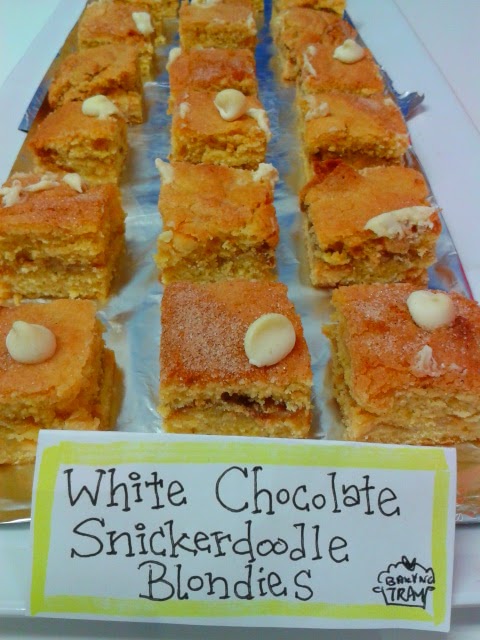 I loved the cinnamon sugar layer in the centre! Delicioussss~~
Sorry for my belated posts! still have so many more bakes to blog about!! Till then... HAPPY BAKING :D
Posted by BakingTray at 8:32 PM No comments: