Work catering #22: Crumble in my tummy 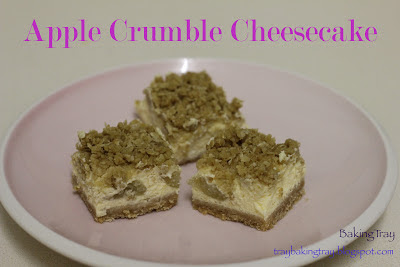 This week's catering has got to be one of my favourites!!! =D =D =D!!! I could just sit and scoff down the whole lot of the apple crumble cheesecake and a jarful nutella cookies, but of course I can't because then I wouldn't have anything to bring to work ><"

Anyways this cheesecake is a baked one, unlike my other no-bake cheesecakes and I'm really happy with how it turned out!

1. Grease and line 20x30cm baking pan. Preheat oven to 160oC/140oC fan-forced.
2. Process biscuits until mixture resembles fine breadcrumbs. Add melted butter and process until combined. Press mixture over base of baking pan. Refrigerate.
3. Make filling by beating cream cheese and sugar with electric mixer until smooth.
4. Add eggs one at a time, beating well after each addition. Fold apple and cinnamon through mixture. Pour into prepared pan.
5. Make crumble topping by placing oats, flour and sugar in a bowl. Rub in butter until combined and sprinkle over filling.
6. Bake for 30-40 minutes or until just set (will wobble slightly in centre). Turn off oven. Cool cheesecake in oven for 3 hours with door ajar. Refrigerate overnight.
Nutella Cookies
Recipe adapted from taste.com.au

1. Preheat oven to 180oC/160oC fan-forced. Line 2 baking trays with baking paper.
2. Beat butter and sugar with electric mixer until light and fluffy. Add egg and Nutella and beat until just combined.
3. Sift flour and baking powder over butter mixture. Add chocolate chips and stir until combined.
4. Roll teaspoons of mixture into balls. Place on prepared tray ~3cm apart to allow room for spreading. Flatten slightly with fork.
5. Bake for 12-15 minutes or until light golden in colour. Cool on trays before tranferring to wire rack to cool completely.

Posted by BakingTray at 7:25 PM