When you fail at a recipe, the easiest thing you can do is just ignore it and find something else you are good at baking XD!! But I really wanted to try out making Caramel Slice again. Previously, I used the wrong type of coconut for the base so I wasn't too happy with it. That was my colleague's secret recipe that I was unable to share, however I found this recipe for "The Best Ever Caramel Slice" on Baker's corner. Not too sure about the "best ever" part but it was pretty yummy ^^
The Best Ever Caramel Slice
Recipe adapted from Baker's corner

Also on my to-bake-list has been these jam drop cookies. Basically a cookie with a little drop of jam in the middle. I used strawberry and apricot jam but the list is endless :) Really simple to make, just make sure those hole you indent is a bit deeper so the jam doesn't run out. 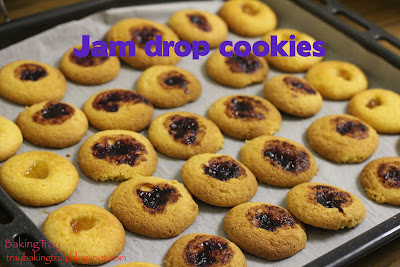 1. Preheat oven to 180oC. Line two baking trays with baking paper.
2. Beat butter and sugar in bowl with electric mixture until pale and creamy. Add egg and beat until just combined. Add flour and custard powder and stir with wooden spoon until just combined.
3. Using lightly floured hands, roll 1 1/2 teaspoons of mixture into small balls. Place on baking trays allowing room for spreading.
4. Use lightly floured finger or end of wooden spoon to make an indentation in centre of each ball. Spoon 1/2 tsp of jam into the centre of each biscuit. Bake for 15 minutes or until lightly golden. Allow to cool on trays before serving.
Posted by BakingTray at 3:45 PM